CT's premier online gun shop. We offer a vast selection at the best prices possible. We also do firearm transfers, consignment firearm sales, magazine limiting and light gunsmithing, Although we do not have a retail store, we still perform firearm transfers in Milford, CT by appointment only. 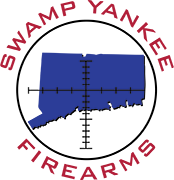 Tell me about your gun shop?  Swamp Yankee Firearms is a small, family-owned business located in "the small city with a big heart":  Milford, CT.  We are an online-only gun shop with the exception of pistol permit courses and FFL transfers which are done by appointment only.  Our goal is to offer our customers the largest selection of firearms at the best price on the internet.  We accomplish this by keeping operating costs low and not having physical inventory.  The overhead costs of a brick-and-mortar gun shop such as rent, payroll and utilities does not translate to an online shop.  All of our inventory is shipped directly from our network of warehouses accross the country so we do not have to purchase and keep physical inventory keeping costs to a minimum.  We then pass these savings on to you, the consumer!

Why buy from Swamp Yankee Firearms?  Because our business model is to offer you the largest selection of firearms at the best price on the internet.  Even though we are an online shop we are still a small business.  When you buy from us your money goes directly to our family and is then spent in our comminity and not funneled to a coprorare machine like the big shops or websites.  So when you buy from Swamp Yankee Firearms we both win.

Where did you get the name?  It's a family term our ancestors used to call themselves.  It originated in eastern Connecticut and the exact definition and origin is unclear and debated.  However, it can be best described as a Connecticut redneck.  Swamp Yankees are charachterized as "salt of the earth" folk with good common sense, skilled with tools, clever speakers who reject modern trends, and typically hunt and fish. Generations later the name still holds true.

What is Milford like?  Milford is a small city on Long Island Sound and accessable from I-95 as well as Metro North Railroad.  Milford has a large commercial presence being the world headquarters for companies such as Subway and Bic.  We have a vast selection of retail stores making life here very convenient.  Even though there is so much business in Milford, it is still very quaint and picturesque with a population of about 53,000 residents.  We have over 300 amazing restaurants and micro-breweries.   Milford is about 90 minutes from New York City and only 15 minutes away from New Haven who hosts best pizza in the county.  The lobster roll was invented in Milford.  We have the longest shoreline in Connecticut and the second longest town green in New England. Milford hosts an annual Oyster Festival as it is the main catch for commercial fishermen.  Residents can fish recreationally in both salt & fresh water and hunters are attracted by our wild turkey and over-population of white tail deer.  We also have a small population of black bear and bald eagles.